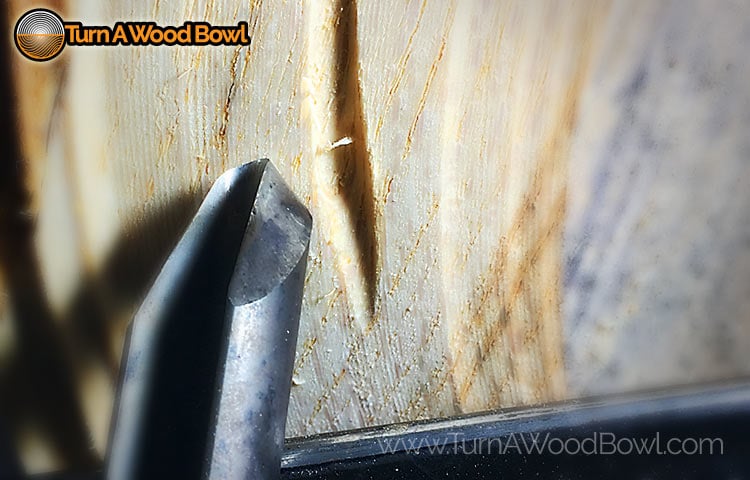 Nasty catches have happened to all of us, especially when first starting out in woodturning. But what causes those discouraging catches in the first place?

There you are, minding your own business enjoying your time turning at the lathe and Boom – a catch! It almost has the same effect as an aggressive dog lunging at you with teeth bared and lungs hollowing.

Like walking on the other side of the street away from that aggressive dog, we will address behaviors and solutions for a better turning experience with fewer catches.

An easy way to get a catch while turning a wood bowl is by using a dull bowl gouge.

Have you ever tried slicing a tomato with a dull knife? The experience can easily resemble a wrestling match with a water balloon. However, a sharp knife glides right through that same tomato slice after slice.

Turning a wood bowl is the same way, we need sharp tools to make clean, smooth cuts. Instead of wiggling around like that tomato, a spinning bowl blank will reject and seemingly argue with a dull bowl gouge.

Take a moment and head over to your sharpening station and apply a fresh edge to your bowl gouge.

Even if you just sharpened your gouge a short while ago, depending on the type of wood you’re turning, you may need to sharpen every 5 to 10 minutes.

Your gouge is ready when the entire bevel is shiny smooth from cutting edge to heel all the way around.

Too Much Too Fast

A bowl gouge is a tool designed to perform a specific task. There are different sized gouges with varying angles of bevel and profiles all for various purposes.

If you push a certain bowl gouge past its natural limits, you can be setting yourself up for a catch at the lathe.

The next time you’re turning a bowl and making a routine bowl gouge push cut, look closely at the cutting edge of the gouge.

When the bowl gouge is engaged in a beautifully smooth, effortless cutting pass, only a tiny percentage of the cutting edge is actually doing any work.

Aggressive passes, especially when clearing material from a bowl blank can engage too much of that gouge cutting edge. The bowl gouge just can’t clear the material away fast enough, and the wood begins to grab and catch.

Learn all the Bowl Gouge Basics by reading this next.

There are a few solutions to this issue.

If you are getting catches while trying to remove large amounts of waste material quickly, try using a larger bowl gouge. A more significant gouge can cut a wider path while still using only a small percentage of its overall cutting edge.

The other solution is based on speed. If you’re working within a safe lathe rotation speed, you may be able to turn up the lathe a bit to remove material quicker.

Take a moment and read this article all about safe lathe speed to know how to set just the right speed.

If you are turning as fast as safely possible without vibration and you can’t turn up the lathe, then slow down your tool pace.

Slowing down your rate of cut will give the bowl gouge time to clear material and prevent it from bogging down and creating a catch.

Taking too big of a cut too quickly with the gouge is a great way to invite a visit from Mr. Catch.

Simply put, the bowl gouge needs to be presented in the best manner to make a cut. It can be called the sweet spot.

When we miss that sweet spot, we are either not cutting and cause a metal to wood clanking, or we are cutting too much wood which is a little like throwing a wrench into the system.

The most offensive wrong angle of a bowl gouge is the open flute. An open flute is The best way to get a violent catch almost every time it’s tried.

When the bowl gouge flute is turned open, it is positioned to have the entire cutting edge of the bevel engaged completely and instantly.

The flute can be used in an open presentation, but this cutting move can be made successfully only after some experience. We’ll discuss this more below.

In the hand of a novice, the open flute bowl gouge is a sure ticket on the nasty catch express.

I would love to see this on a high-speed video replay. Let’s think about it for a second.

The bowl gouge is open and jabbed into the turning wood. A massive c-shaped cut starts all along the cutting edge of the gouge tip, and within probably less than an inch (and in a millisecond) the flute is filled with a wood plug, the cutting edge becomes overwhelmed and boom, the gouge is instantly kicked out of the cutting groove.

The ideal angle to approach a cut is with only a small portion of the bowl gouge cutting edge engaged at a shear angle.

Think of this as nibbling versus gobbling a cutting path along the bowl blank.

Typically when the bowl gouge is turned to a 9 or 3 o’clock angle towards the direction of a push or pull cut, the pass will be smoothly cut.

Rotating bowl blanks can sense fear. You may think I’m kidding but watch someone new who’s a bit timid at the lathe. It won’t be long before there is a catch.

Maybe the cause and effect are reversed, but lack of confidence seems to invite catches.

Uncertainty about how to hold the bowl gouge or how to approach a cut is like playing Russian roulette with nasty catches. It’s only a matter of time before the inevitable happens.

Let me give you an example. Recently at a woodturning symposium a demonstrator had a regular bowl mounted to the lathe with a faceplate. He was working the bowl exterior curve and tenon.

As he was finishing up the sides, he approached the bowl rim, up near the headstock of the lathe. The rim area was still rough wood and needed to be shaped.

He recommended not trying to bring the tool rest around by the headstock to work the rim because “it can make a big nasty catch,” he explained.

At first, I thought, “that’s not that big of a deal.” Then I recalled when I first tried doing this reach around rim fix. “Oh ya!” I DID get some nasty catches.

It was only after a few big grabbing catches at that rim position that I put two and two together and figured out the best bowl gouge angle.

The first few times I tried fixing that rough rim I wasn’t sure what angle would work.

Catches, especially big loud, violent ones can be good teachers. “Whatever you just did…DON’T do that again,” say the catches.

Because of the rough rim surface, there are random projections of wood to encounter. A larger bowl gouge held in a three o’clock flute position is ideal for making a scraping cut.

Even with the right gouge and flute angle you also need to have your right hand back down the handle for added leverage and be prepared for impact.

When I first approached this cut with little experience and a gouge that was too small and with the flute relatively open, I was quickly bit with a nice aggressive catch.

Now, however, with more experience and certainty this rim leveling cut is second nature.

Be aware that even if you have certain bowl gouge cuts down pat, there still can be other cuts that you just don’t have enough experience with yet.

When catches occur while trying out new cuts, think of them as a teacher, a socially unacceptable negative-reinforcing teacher, but teachers none the less.

Don’t give up. Try a different angle or different gouge and figure out the path that doesn’t include a bang!

Whether you know it or not, as a wood bowl turner, you are creating a new set of motor muscle skill sets that all turners uniquely share.

Not sure about this? Let’s test your memory.

Recall your first bowl, when you first eased that bowl gouge tip across the threshold of the tool rest. You probably were met with a clack, clack, clack, and vibrations that rattled up your shoulders.

With some experience, and even just after a couple of bowls, your brain began making new pathways and spreadsheets of data for how to deal with this new thing called “bowl turning.”

Without even having to think about it our mind and body started to make minute adjustments so subtle that they were almost not noticed.

Fast forward and after about 50 or 100 turned bowls we have precise ways our body moves and acts while making a bowl on the lathe.

Why is all this critical?

Early on along the path of turning wood bowls, there will be times when you simply aren’t capable of making certain cuts or moves.

Don’t be discouraged. You will be able to make all the moves needed to create the most intricate turned bowls imaginable. However, those skills need to be developed over time and with experience.

A great example of a refined motor muscle skill set is the delicate one-shot finishing cut executed from rim to the bottom inside of a bowl. This cut has the flute relatively open, which is a no-no for beginners, and just a small section of the cutting edge is engaged while performing this cut.

We’ve all seen videos of guys online making this cut and usually making it look effortless.

But what is bowl gouge handling reality?

So why do we have to progress so slowly? It’s not because we’re dumb or aren’t understanding the concept, at times.

We need to practice and persist and allow the physical mechanisms within us, that are not part of book learning, enough time to catch up with our ambitions.

Woodturners are literally building new neural networks to handle and operate all the intricate maneuvers and motions needed to turn a wood bowl.

When we try to make cuts that our micro-muscle abilities aren’t yet ready for, we will usually push too hard or move not in quite the right place and cause a catch.

Keep practicing, and over time you will be able to do an open flute rim to bottom cutting pass with one hand. Just be patient.

Above all else do not let a catch or even many nasty catches stop you from turning the wood bowls you imagine.

Think of catches as teachers. Each one has a lesson to share. Learn from the experiences.

Change your tool angle. Use a different sized gouge. Hold on a bit tighter at certain times and anticipate a possible moment of struggle.

Whatever it takes to get you beyond that darn catch, do it.

I can tell you from experience that nasty catches are really a good thing. You are pushing the edge of the envelope, and that is where growth occurs.

If a turner has never had a catch, they probably haven’t turned much more than a toy top and definitely not more than a single bowl or two.

Jump outside that comfort zone and have a catch or two. Catches are a cheaper adrenaline boost than Starbucks, and if you’re alert enough, they will point you in the right direction for making amazing wood bowls.