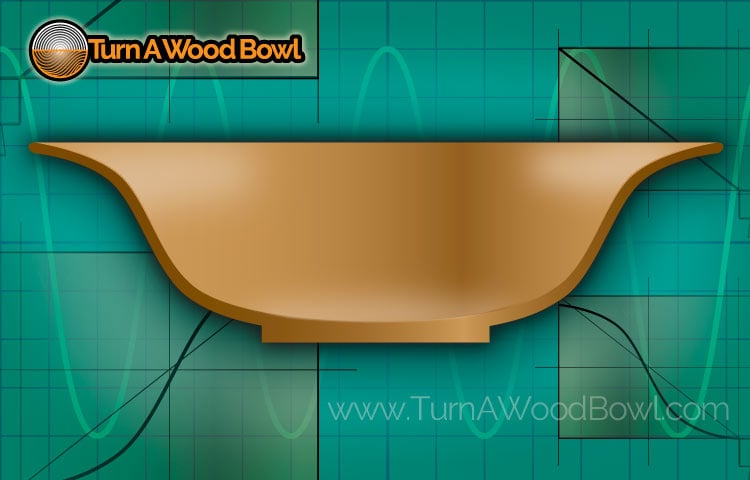 An ogee design shape can put a soothing curved touch on the exterior of any wooden bowl.

What is an ogee? An ogee is a double curve usually with each curve opposing one another like an “s.” Ogees frequently appear in architecture, mathematics and the contour of bowl designs.

Think of line graphs and the associated plotted curves. Oscillating curve lines on an oscilloscope are often seen as continuous looping ogee curves.

Why Ogee On A Bowl?

Ogee curves on a bowl are less about surface decoration, and more of a way to add curvature and interest to the underlying foundation of the bowl shape.

Instead of a single arching outside bowl curve, an ogee changes the path and engages the viewer’s attention by leading the eye down a multi-curved edge.

After all, curves do seem to make most things look better and draw a lot of attention.

Designing the curved ogee exterior of a wood bowl also allows for an exciting bowl interior.

Simply mirroring the curves of the outside wall will make the bowl interior appear full and graceful as it flows to the bottom center.

Also, ogee shaped bowls have many options when it comes to the bowl rim. Instead, of merely following the bowl exterior, an ogee bowl rim can take on a life of its own.

Ogees come in many forms and proportions.

Let’s take a look at a few different types of ogee bowl designs.

A traditional ogee bowl exterior has a symmetrical top and lower curve, and the proportions of the bowl are usually divided into thirds.

Regardless of overall dimensions, a traditional ogee has an emerging outward curve from the base half which blends to met with an overhanging reaching curve on the top half.

Unlike a traditional ogee which disperses the flowing curves of an ogee across balanced thirds, a subtle ogee does not depend on even distribution.

A subtle ogee can be like the name implies, very subtle. At first glance, the ogee opposing curves might not even be apparent.

When making a subtle ogee you can have a larger more traditional single outside curving bowl shape, but the design flares out at the top rim and tucks under at the base, just a small amount.

An asymmetrical ogee really has no rules. Mainly, there will be a curve at the top and bottom at opposing angles, but the size and locations can be anywhere.

Think of a large, broad curve coming up from the base matched with a short small outward curve at the rim. Unbalanced different curves equal an asymmetrical ogee shape.

An unorthodox ogee is the reversed ogee.

Instead of flowing up to an overlooking shelf of a top rim, a reversed ogee shape drops from a vertical rim down into the bowl.

Reversing the ogee is not seen very often but creates an interesting bowl design.

Think of the coin funnels at the mall where the coin rolls around and around before disappearing in the center vortex.

The top rim of an ogee bowl can be shaped in several ways.

Curving the rim with a high point in the center makes for a pleasant sensation when the bowl is picked up.

Taking the top rim edge and having it deviate just a touch from the underside curve adds a bit of mystery and interest.

Furthermore, the way the rim edge interacts with the bowl interior can add striking contrast.

Creating an ever so slightly upturn and drop into the bowl adds interest both visually and in the physical feel of the bowl.

Taking this concept one more step further by undercutting the inside wall just a tad adds a shadow line around the rim and makes a bold visual statement.

When making an ogee shaped bowl, the exterior needs to be the priority, but don’t overlook the rim and bowl interior. There are many options to add on both sides of an ogee.

Here is how I visualize and plan an ogee bowl design.

If you are planning to create a more traditional ogee double balanced curve shape, you can start with a simple dividing line at the halfway point on the side of the bowl blank.

I then locate and divide the base of the bowl blank into thirds. The thirds locations are where the apex of the curves form.

In general, I usually make the foot or base of the bowl about one-third of the bowl’s diameter.

Dividing by thirds really works well in many cases. If you’re stuck while designing a bowl, locate and measure by thirds and go from there.

Pre-Visualization is critical to make, or rather “see” the ogee design before you can begin to work the subtle curves.

To aid in visualizing the ogee shape, I like to remove material away first. Shape the tenon and give yourself some room to play by forming a shoulder above the tenon.

Peel away the outer corners of the bowl at about a 45° angle until a general bowl shape begins to appear. Don’t try to shape the final bowl just yet. Leave plenty of material to work with still.

With the bowl roughly shaped, now is the time I like to add the half or third dividing marks to the bowl as a visual aid.

Back to the visualizing. Now with the bowl marked, I will undercut the rim down a bit, so the overhang of the top curve starts to become apparent.

Either way, remember that the top surface of the rim may or may not be flat and flush, so don’t make this early rim undercuts too deep. You will want to have material later to work with.

With the underside of the rim area removed, there is a starting point to begin shaping the ogee.

You can shape the curves in whatever order you like. I find that working a little of each curve back and forth helps me see the overall final shape easier.

Don’t concern yourself too much with the merging area where the curves meet just yet. The curves should be getting close to merging, but usually, there is a bump that forms on the middle. We’ll address this in a moment.

Depending on your lathe configuration and how much tool access you have, you will probably need to deploy both the push and the pull bowl gouge cuts.

I like to use the push cut whenever possible because it feels natural and I do it a lot. However, the overside curve of the bowl usually will require a pull cut as well.

Pulling a cut from the bowl bottom to the outside edge works best because it is a supported grain cut and will leave end fiber cut smooth rather than ripped.

Ideally, after a little time turning, the ogee-curved shape emerges and begins to materialize.

Be patient at this point and work slowly. It is incredible how tiny light cuts along these curves can quickly change the overall look and feel of the entire bowl appearance.

Rotate the bowl gouge flute inward and use the wing to make scraping cuts to lightly remove material where needed.

As soon as the overall shape is where you’d like, stop making any more material removing cuts. Now, focus on refining the bowl shape.

Shear scraping is the ideal way to make the subtle adjustments needed at this point. If you’re not familiar with the shear scraping technique, you really will benefit from reading this article.

Use the shear scrape to refine and blend all the curves together. But, be careful with the shear scraping technique on the inside curve under the rim.

If you’ve turned a few ogee bowls and you want to give yourself a challenge, try making a curled over rim.

Making the rim of the bowl curl over is a stunning effect and very eye-catching.

If done well, an unknowing viewer may think the curled rim was somehow mechanically rolled or stretched over. But with further investigation, the wood grain smoothly flows around the rim.

Be aware that the grain direct will need to be addressed from two directions while executing the underside of the curled rim. The round nose scraper will be very helpful for this adventure.

Life is not linear. We are always in an ebb and flow, like riding a roller coaster, or a green wavy line on an oscilloscope.

Perhaps the parabolic curves of a well-executed ogee wood bowl harmonize and connect us with that flow of life.

Picking up and holding an ogee bowl seems to have a soothing effect on the soul. Running our fingers up and down the curves just seems like the right thing to do, like it has to be done.

If you haven’t tried to turn an ogee wood bowl yet, I hope this article inspires you and is a useful guide on your journey.

And if you have turned ogee bowls, perhaps you’ll try some other options like the asymmetrical, reversed ogee designs, or even a curled over rim.

I’m glad to share this information with you, and I’m really shocked I have made it all the way to the end without making a single “Oh Gee” joke! 😉 Ha!