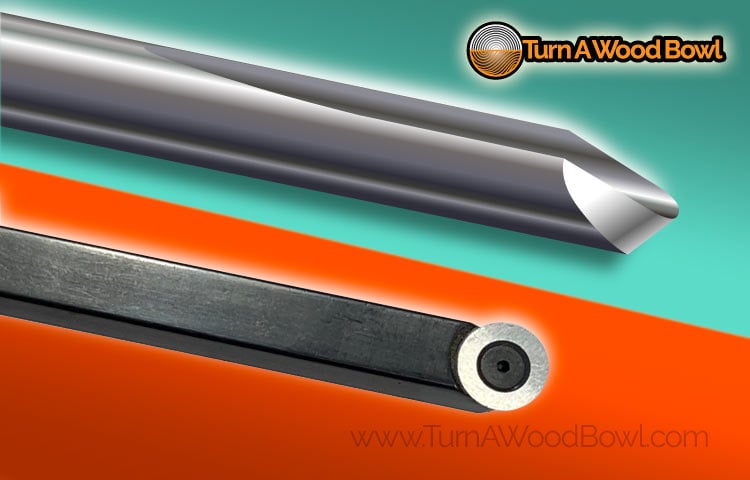 The answer can be highly controversial, depending with whom you speak. To be honest, carbide and traditional turning tools each have advantages and disadvantages.

In this article, we will unpack all the pros and cons of carbide and HSS turning tools so you can better understand which tools might be best for you.

For some reason, probably ego, some traditional wood bowls turners seem to look down on turners using carbide scrapers.

Perhaps it is because the relative newcomers, carbide turning tools, are quicker to learn and have rapidly introduced more people to the world of woodturning.

With traditional turning tools, there is a learning curve and time commitment needed to gain proficiency. Along with this skill comes a perception of earned respect from fellow turners.

Before I started turning wood bowls, I was fascinated with the idea of turning a wood bowl. I watched tons of YouTube videos and read articles online until one day a turning seminar popped up at a local woodworking store. I jumped at the opportunity.

In all my research, I’d seen traditional, and carbide tools in use, and the long curly shavings created with a conventional HSS bowl gouge seemed so dreamy.

When I arrived at the turning seminar, we were handed 8-inch bowl blanks and assigned a workstation, which consisted of a small Jet lathe, a screw chuck, four jaw chuck, and three carbide turning tools. I was a bit disappointed not to see a traditional bowl gouge, but what did I know at that time.

In about three hours, I went from never turning anything on a lathe to turning my first bowl. It turned out pretty nice despite less than a smooth surface.

I was hooked and now needed to turn more!

After turning my first bowl, I still felt I needed to learn much more before I committed to purchasing a lathe and other gear.

I’m so glad I waited and learned first before buying stuff. God knows I would have purchased many unnecessary items that would have only collected dust.

I found a turning group that meets once a week. The same group I still turn with every week. My first visit was fantastic, and I even left with my second wood turned bowl. This time made with a traditional bowl gouge. Wow, was that tool different at first!

It was when I first chatted with the guys there that I immediately learned the bias of traditional tools compared to carbide.

Out of nowhere, a guy (I won’t mention names) made a snarky remark about whether I planned to use expensive carbide tools or not. I just shrugged it off and didn’t bother telling him about my first carbide turned bowl.

The second sensitivity landmine I walked into was mentioning YouTube. “Oh, there are people in those videos that will get you killed if you learn on YouTube.” Okay, I guess I won’t bring that up again. I especially won’t be sharing my YouTube channel with them. LOL

I can understand to a certain degree, perhaps why some people are sensitive to carbide tools and YouTube videos. Many people treat woodturning as a casual hobby or pastime.

To be quite honest, if you decide to only “casually” learn traditional woodturning using traditional bowl gouges, spindle gouges, and round nose scrapers, it can take many years before you get the hang of turning confidently.

It’s easy to understand how people who have spent much time developing skills and are more serious about woodturning, might be defensive, especially when someone casually shows up and creates acceptable results using carbide tools right off the bat.

Whatever their reason for being offended by carbide tools or watching other turners on YouTube, it’s their problem.

They’re not going to change, and you can only do what’s best for you. Just know these people are out there if you haven’t met them yourself yet.

Carbide tools are ready to use out of the box. The razor-sharp edge of a carbide tool stays sharp for a very long time and requires no sharpening station, unlike a traditional bowl gouge.

If one side of a carbide cutting tip wears out, depending on the cutter shape, the tip can be rotated to a new fresh sharp area.

The most significant disadvantage of carbide tools is the fact they are scrapers. Carbide tools are introduced to the wood at a 90° angle. This steep impactful angle scrapes and tears out wood fibers violently, even with a sharp edge. When turning wood bowls, this is primarily a problem in the trouble zone areas.

Depending on what type of wood you are turning, the torn out surface quality can range from okay to completely unacceptable. Often you may need to spend more time sanding a piece turned with carbide tools than you took turning it in the first place.

Also, carbide tips do wear out and are expensive to replace. They can be sharpened on a diamond stone to lengthen their use, but eventually will need to be replaced.

A single HSS traditional bowl gouge can turn an entire bowl, inside and out.

An assortment of different shaped traditional HSS turning tools can allow a turner to turn anything imaginable.

Presenting a traditional HSS bowl gouge at the correct angle with the right motions can take a good deal of time to master. Think of it like learning to ride a bike or play a musical instrument.

It will take some time.

To become proficient using a traditional bowl gouge, you will need to learn about supported grain direction cuts, riding the bevel, the different bowl gouge cutting techniques, and much more.

That might seem overwhelming, but remember what it was like to pedal that bike all by yourself or play that first song.

Yeah, that’s what it feels like…times a hundred.

It’s worth ALL the effort!!!

Traditional HSS tools require sharpening often. Depending on the wood being turned, traditional tools may need to be sharpened every few minutes. And this sharpening requires a dedicated sharpening station.

As I learned with the weekly turning group, it became apparent that the sharpening station was almost as essential or equal to the lathe.

There are two schools of thought about the different turning tools – carbide and high-speed steel.

The carbide turning tool school of thought is that carbide is the best thing since sliced bread. Carbide tools require no sharpening or steep learning curve. The carbide tips stay sharp longer than HSS. And carbide turners don’t mind sanding the wood surface a bit more when finished turning.

Traditional HSS turners think that the bowl gouge provides a superior cut that can’t be matched. Sure, the skill needed to master a bowl gouge does not happen overnight, but that too is a source of pride for a craftsman. Sharpening tools frequently is an accepted part of the turning process for a HSS turner.

Which Is Right For You?

If you are new to turning and aren’t sure if you’ll like turning, or more importantly, whether you’ll keep doing it, try the carbide tools.

Carbide tools offer instant results, and you will quickly discover if you want to continue turning more pieces.

Think of carbide tools as the “gateway” to more serious turning. If you get hooked on turning with carbide, perhaps slowly work up to HSS tools and learn them and their advantages one at a time.

Over time you will probably be turning with a mix of traditional and carbide tools. A combination of tools is entirely acceptable!

If you want to do a couple of woodturning projects but don’t think you’ll get into turning that much, use carbide tools.

Say you’ve made a cabinet, and you want to turn a few doorknobs but have never turned before. Carbide tools would be perfect for that situation.

Many pen turners use carbide tools to shape pens. Guess what? Those same carbide tools can be used to made bowls, perhaps small bowls, but it’s a great way to experiment before committing to the expense and time of learning traditional HSS tools.

On the other hand, if you have made a few bowls and you’re excited about the idea of making bigger, better bowls, you might decide to learn traditional HSS bowl gouge techniques and other tool usages.

Yes, it will take more time to develop the fine motor-muscle skills needed to make precision cuts, but the results will be worth the effort.

Creating bowls as pieces of art can be done with a mix of tools. However, it will be difficult, for example, making elegant 1/8-inch thick walled bowls using only carbide tools. Fine precision work is best performed with a traditional bowl gouge making micro-fine smooth shaving cuts.

The bottom line is that carbide and HSS traditional turning tools both have their places in the woodturning world.

Neither is wrong or right.

In fact, your tool cabinet can include both.

At the end of the day, it’s about what you create and not necessarily the tools that get you there.

Use what works and best suits your needs.