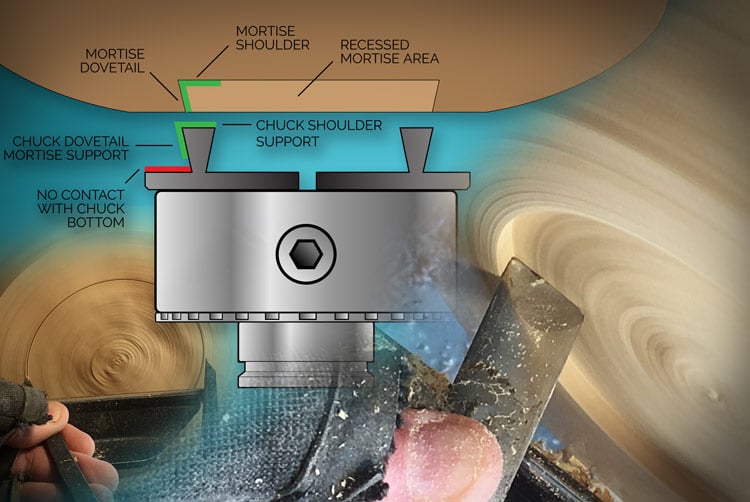 The wood bowl mortise method to attach a bowl to the lathe is a straightforward and relatively simple procedure. Mortise creation is an excellent and efficient technique for beginners and experts alike.

What is a Bowl Mortise

A recessed cavity in the bowl bottom, called a mortise, receives the jaws of a four-jaw chuck, also called a scroll chuck, which expands to grip the wood mortise rim. The gripping force of the four jaw chuck is strong enough to hold the bowl throughout the turning process.

The term ‘mortise’ is derived from traditional woodworking terminology. A tenon is an extended piece of wood designed to be inserted into another wood space or cavity. The mortise is the cavity or opening intended to receive the tenon.

With bowl turning, a mortise does not receive a tenon. Instead, the four-jaw chuck goes inside the mortise and makes a holding connection.

A bowl tenon can also be made, and it too is held by the four jaw chuck. Here is a detailed article about sizing and making wood bowl tenons.

Four jaw chuck can both hold in the expanded and contracted positions. The chuck holds tenons with contracting pressure and mortises with expanding force.

Why Use A Bowl Mortise

When mounting a bowl blank to the lathe, typically the outer profile of the bowl is shaped first. After the bowl exterior is complete, the bowl blank is flipped over to expose the interior for turning.

When the bowl is flipped over, there needs to be a way to attach the bowl to the lathe. Unless you’re turning a wood bowl without a chuck, you will need to decide whether to create a tenon or mortise on the bowl bottom.

A mortise is a quick and easy way to add an attachment point to the bottom of a bowl. The simplicity of expanding the chuck jaws to grip a mortise makes the mortise ideal for production turning.

Larger bowls can be turned confidently with an appropriate sized four jaw chuck and a recessed well-formed bowl mortise.

Also, if you are doing a turning that requires unmounting and remounting the bowl several times to the lathe, such as multiple finish coats, the mortise is a useful attachment method.

With the lathe off, lay the bowl gouge shank across the bowl blank face to assure the surface is level. The bowl gouge can double as an impromptu level.

Select the appropriate sized chuck, take a pair of sharp dividers and adjust them to be just slightly larger than the chuck jaws in the fully closed position. You will need the bowl mortise to be broad enough to receive the four jaw chuck, but not excessively wide.

With the lathe running at a slow speed, carefully eyeball the dividers which are straddling the center of the bowl. With the left tip and only the left tip, lightly touch the left divider tip to the wood at a slightly downward angle. Keep the right tip from touching wood!

Use a sharp parting tool to make a clean ninety degree cut at the outer most point of the bowl mortise. Make this cut no more than about three-quarter of the height of your chuck jaws. The mortise must not be deeper than the jaw height.

The two critical cuts for a mortise are the mortise depth and dovetail jaw angle. We’ll get to the dovetail in just a minute.

The top surface of the chuck jaws is the level point of reference to secure the bowl securely on the chuck. The bowl must sit flat up against the top edge of each jaw.

If the mortise is too thick and the bowl rim reaches of touches the base of the jaws without contacting the top of the jaws, the bowl will not attach properly to the chuck.

With the parting tool, continue removing material from the mortise area. You may also use a bowl gouge or any other tool that you’re comfortable with to create a flat mortise bottom.

It is time for the dovetail angle, once the mortise is essentially an indented cylinder in the bottom of the bowl.

Take an angled skew chisel, place it level and centered on the bowl and scrap a gentle inward undercut angle on the outside of the mortise wall.

The dovetail angle is about eleven degrees. Take your time with this and make light passes until the angle matches your chuck jaws. A dedicated mortise dovetail scraper is available, and it makes this step very quick and accurate.

An interesting note, the area in the center on the mortise that is not in the vicinity of the jaws, does not have to be completely removed. Basically, the jaws only need a channel for insertion and expansion.

A well-proportioned mortise is just wide enough to sit down on the jaws of the four jaw chuck. The bowl mortise drops down the outside of the jaws but does not touch the jaw base.

The expansion of the wood chuck jaws quickly engages the wood of the mortise and holds firm.

A mortise that is too deep will not rest squarely on the top of the jaws and is not stable or secure. The best way to correct for this issue is by reattaching the bowl blank to the lathe in the original orientation and removing access area around the mortise.

No dovetail angle in the bowl mortise side walls is a recipe for a flying bowl blank. The angle of the dovetail is the key element that makes the mortise connection so strong. Without the dovetail, the mortise will most likely slide right of the lathe chuck and go sailing.

While a bowl mortise can be made shallow, if it gets too shallow there is a danger of the wood chuck losing grip and the bowl blank being detached. Use caution when making a shallow mortise and make light cuts while working to not dislodge the mounted bowl blank.

There are a few situations where you will not want to use a mortise to attach your bowl to the wood lathe.

Do not make a mortise if the bowl exterior is shaped narrow or only has a thin wall area surrounding the mortise. In this situation, a tenon connection to the lathe would be more appropriate.

If you’re turning an end-grain wood bowl, do not use a mortise connection. The end-grain fibers of the wood bowl blank, in this orientation, will most likely break apart under the force of the four jaw chuck.

There are a few disadvantages to using the mortise in your bowl turning process.

Because the mortise creates an indent in the bowl bottom, that space needs to be calculated in the bowl wall and bottom. The mortise depth makes it challenging to develop thin-walled bowls while leaving the mortise in place.

While it is possible to refine the bottom of the bowl after the interior is complete, this is not a simple task. Unlike a tenon, which is simply removed or reshaped to form the bowl’s final foot, the entire area around the mortise needs to be worked to alter the final bowl foot.

The attachment point is a stickler for me. I love the idea of someone, unfamiliar with woodturning, holding a finished bowl and not knowing how the bowl was made. The recessed mortise hole is a dead giveaway and seems pretty obvious how the piece was attached to the lathe.

The mortise has some advantages as well.

The wood bowl mortise is a simple joint that allows quick detachment and reattachment to the wood chuck. Making the recessed area for the tenon can be performed with many tools including scrapers.

With an appropriately sized four jaw chuck, a mortise can be a very secure and stable for larger bowls with relatively flat bottoms.

Hidden surprises can be placed within the mortise area, once the bowl is complete. Using a sharp point tool, a few lines may be added to create a concentric circle design. Your signature with the wood type and date are always nice. You might even consider turning a small area and inserting a coin secured with epoxy.

The wood bowl mortise is a great way to attach a bowl to a wood chuck. Let me know if you use the mortise in your bowl turning process.