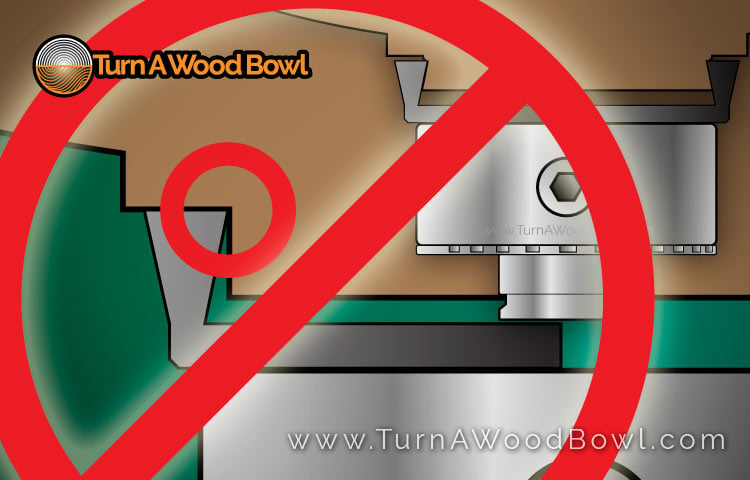 The form and design of a wood bowl tenon shape are critical to creating a secure and stable connection to the four-jaw chuck.

How do I make a wood bowl tenon or foot?

There are many ways to make the tenon or spigot on a wood bowl incorrectly. It’s essential to know how the tenon shape can be made wrong to understand how it to make it correctly.

We will go over five common mistakes that can be easily overlooked when creating a tenon shape.

Not taking the time to form a clean tenon or spigot correctly will cause problems down the road.

First and foremost, nobody wants a spinning bowl blank to come flying off the lathe while turning.

A well-shaped tenon will provide an inter-locking design that is almost impossible to come loose in the chuck.

However, an inappropriate tenon shape can potentially come loose and send a bowl flying.

Most people fear a bowl flying off the lathe and overlook the seemingly minor issue of stability and vibration.

A poorly formed tenon or spigot may not grip the bowl base properly, but also not send a piece flying either.

I find a much bigger issue with a lousy tenon is that it can shift within the chuck just a bit and cause a piece to be off-center.

When a bowl blank is unstable in the chuck, all the surfaces need to be recut because they no longer run true and straight.

And if the tenon allows the bowl to keep shifting in the chuck, you will never have smooth bowl surfaces.

Working with a weak foundation, which is essentially what happens with a poor tenon shape, creates a shifting and unbalanced bowl blank, which can lead to much frustration.

First, I need to be clear here because there are often woodturning terms that get thrown around and interchanged freely.

A woodturning tenon that is simply a straight cylinder is usually actually called a spigot. And there is a chuck designed with straight jaws to hold this type of tenon called a spigot chuck.

The confusion arises when people say “spigot chuck” or “spigot” about a wood bowl connection, which is usually called a “tenon.”

To further add to the confusion, there are four-jaw chucks with straight gripping serrated edges, such as some of the Oneway chucks.

I’m not a fan of these chucks only because they do not seem to hold a large or heavy bowl blank very well.

In my experience, it is very easy to apply too much force and move the bowl when it is mounted to a serrated style chuck.

Because of that issue, I only use dovetail shaped four-jaw chucks which grip and hold bowl blanks better than any other chuck design I’ve found.

To design a wood bowl tenon in a simple straight cylinder form does not utilize the super holding powers of a dovetailed four-jaw chuck.

The first issue is that a simple cylinder in a dovetail jaw chuck will only be held and gripped at the very base of the cylinder.

The biggest problem with a dovetail-less tenon shape is the grip. The spinning bowl has nowhere to go but slide up and out of the chuck.

Not taking the time to shape a corresponding dovetail angle on your bowl tenon forfeits the best attribute of a four-jaw dovetailed chuck.

Use a skew chisel, detail spindle gouge, or unique tenon dovetail scraping tool to shape the corresponding dovetail to your tenon shape properly.

In most cases, after creating a few dovetails, you will be able to eyeball the approximate dovetail angle with ease.

If you aren’t comfortable with eyeing the angle, use the custom dovetail angle scraper, or a slew chisel that has been shaped to match your chuck jaws.

Ok, so you have the dovetail shape formed well on your tenon, but what about the tenon shoulder?

The second most crucial design element of a good tenon shape is the shoulder. Because the shoulder seats on top of the chuck jaws, the shoulder supports all of the force you apply with the bowl gouge as you turn.

The gripping action of the dovetail holds the bowl in place. The shoulder is what keeps the bowl from shifting side to side in the chuck.

A bowl tenon shoulder needs to be perfectly straight and flush.

Shoulders that are missing or tapered upward will not make flush contact and seat on top of the chuck jaws.

If the shoulder doesn’t exist or is angled upward, primarily formed by the bottom of the bowl, very little wood is in contact with the jaw top surfaces.

When pressure is applied with the bowl gouge as you turn, the tenon and bowl can quickly get nudged in the chuck.

The grip of the dovetail can not solely hold the bowl blank and keep it steady. Together, the dovetail and the shoulder work to hold and stabilize the bowl in the chuck.

Like the previous issue, an outwardly angled tenon shoulder is not a great design.

The point of contact with shoulders that slopes outward only occurs on the outer part of the jaw top surfaces.

While this shoulder contact is better than not having a shoulder at all, there still isn’t enough material in touch with the top of the jaws.

Initially, the bowl may seat and turn fine. However, if you get a catch or become more aggressive while coring out the bowl interior, for instance, you might crush the shoulder in a particular area.

Because there is only a thin point of wood touching the jaws, if a particular area of the shoulder gets pushed inward, the entire bowl then turns off-center, vibrates, and can come free.

Again, take your time to form a nice flat shoulder to seat securely to the top of the four jaw chuck.

You have created a nice flat shoulder and a dovetailed spigot that matches perfectly with your chuck. Fantastic!

But what about that little area where the dovetail meets the shoulder?

Overlooking the corner between the bowl tenon dovetail and shoulder can also lead to problems.

Without a crisp inside corner cut to merge the dovetail to the shoulder, you can be left with a ridge that can interfere with a flush shoulder attachment.

When you go to attach the bowl blank to the chuck, the jaws will usually grip fine because of the pressure and leverage applied with the chuck key.

However, the shoulder may not seat properly if the corner between the dovetail and shoulder is not clear.

If the bowl tenon shape is not seated firmly on the jaw tops, it will shift around in the chuck. The gap will cause vibration and make turning a smooth, clean surface very difficult.

Absolutely no gap should appear between the tenon shoulder and the top of the jaws. Even a gap not wide enough for a hair to fit in will cause the bowl to move within the chuck.

Take a moment when you are shaping the tenon dovetail and shoulder to make sure the inside corner is crisp and sharp.

Any tear-out of torn fibers anywhere along the dovetails and shoulder will cause the bowl not to seat correctly.

It is also ok, to exaggerate this inside corner between the dovetail and the shoulder. Just don’t make it too deep.

At this point, you know the importance of the dovetail shape, a flat shoulder, and crisp inside corner, what could be left to know?

Making the tenon too long is a common mistake that is made a lot when turning tenon shapes.

Looking at the design and shape of a four-jaw chuck, it seems like the tenon shape should seat down on the inside bottom of the chuck. Right?

I know I thought that was completely fine when I first started turning. After all, the base of the chuck must be super secure, I thought. Ha!

No, the base of the chuck is not engineered to come into contact with the wood bowl tenon. Only the sides of the dovetails and the top of the jaws contact the bowl tenon, period.

Even if it were ok to contact the base of the inside of the chuck, it would be pretty tricky to shape a tenon to fit perfectly to the chuck bottom and also properly contact the dovetails and jaw tops.

The problem with letting a tenon touch the inside bottom base of the chuck is that tenon lifts off the jaw top surfaces.

And just like the improperly shaped shoulders, if the bowl is not seated on the jaw tops, it can and will shift within the chuck grip as you turn.

If needed, measure the height of your jaws from the inside base of the chuck. Make sure your tenon is only about two-thirds to three-quarters the height as that distance. Knowing this distance will ensure your tenon does not touch the chuck bottom.

Like the angle of the dovetail cut, after a few tenons, you will quickly know if a tenon is too long or not.

Sometimes it is essential to see the wrong ways of doing something. Not to be negative, but to understand better why the proper way works so well.

I love using tenons on my turnings for two main reasons, they are secure, and they can be removed, leaving little to no evidence of how a turning was attached to the lathe.

To learn all about making the perfect tenon, pop over to this article about Making The Perfect Tenon next, and I’ll show you exactly how to do it.